I for one have never seen an agile approach work effectively,

All this talk about “collaboration” doesn’t mean jack shit without proper documentation always relying on “customer interviews” which change all the time, I want to stick to what I know best to develop software,
ffs I think agile just boomed because the MBA’s want to cut costs and keep the BA and QA out.

Irresponsible as it may seem but I don’t want to do the jobs of 4 people, I don’t want to be a project manager, business analyst and QA on top of being a software developer. 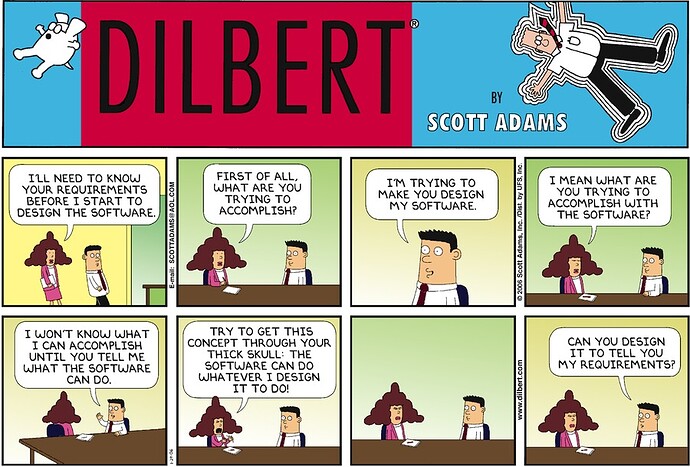 I interned at a place that used Agile, while I don’t have anything to compare it to, but it certainly seemed needlessly stressful. The joke among the team was always “Someday, we’ll get to switch to Kanban.” which always made more sense to us based on the work flow, and seems like it would be less stress inducing. I guess it depends entirely on the business, but where I worked the last day of sprint was a kind of artificial deadline and not meeting it meant being berated by management.

Though this differed from what you’re describing because we had project managers, QA testers and BAs. I think there were even more BAs than developers.

I guess the tl;dr is just that it doesn’t have to be more stress inducing, if management didn’t treat it like it were a deadline, and just a period for working. Then again at that point you might as well switch to something like Kanban.

I work at place where Agile works really well, and I don’t really want to get into some kind of religious war about it, but I will say that perhaps the problem isn’t Agile? Agile is more of an attitude than a process in some ways. It is an attitude of developing quickly, breaking things, and then fixing them quickly. I am a QA for my work and Agile is supposed to have everyone on a team work together, not function as an excuse for a company to cut positions. If your company is doing that and enforces rigid deadlines, they’re doing Agile wrong. If they’re coming down on you harshly for any mistakes, that’s a problem with management and not with the process. Perhaps switching to a less toxic company would be better. A lot of companies claim they do “Agile” but they’re actually doing mini-waterfalls, so just putting more pressure on teams because the management doesn’t understand how Agile is supposed to work.

I am on a team with Kanban and a team that does regular sprints; everyone on both teams works together really well and they’re productive. Management is laid back and doesn’t interfere much. Yes, there are deadlines but there is a lot of communication among team members so everyone knows what it is expected of them.

I don’t really know what to say that would really help you, so I hope your situation gets better. Good luck.

Ive only been at my current job a few months and they’re still trying to ‘perfect’ their sprints, but for me, It’s incredibly stressful. Im not only new to this company but programming as well. I felt intense pressure to meet deadlines and catch up quickly. Maybe itlll get better once I halfway know what Im doing and get comfortable but for now, It’s a mental strain. Im not quite sure Agile is even the best approach for my group. I would feel more comfortable taking a handful of projects over a month or some time and working that way.To your point, it is very difficult to operate a company using Agile effectively. Everything sounds nice at some point. It doesn’t always mean its best. shrugs